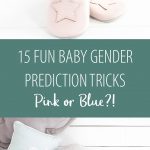 Pink or Blue? Use these 15 tricks to find out gender of baby. Use just for fun or as a super cute baby gender reveal party idea or baby shower game.

In a quest to avoid unnecessary ultrasounds and to torment our friends and family just a little, we didn’t find out whether we’re having a boy or girl this pregnancy.

It won’t be long now until the big reveal, so I decided to search out the “old wives tales” of the internet for baby gender prediction.

Some of these are the opposite depending on where you look. I just went with what seemed to be most common or what I actually heard growing up.

Our first baby was a boy. We found out with an ultrasound at 18 weeks. but I just knew a couple of weeks before. I had started calling him a “he” by then so I wasn’t surprised at all when the ultrasound clearly showed he was a boy.

This time, though it’s going to be a surprise! That is unless some of these prediction techniques are really true.

15 Fun Tricks to Find Out Gender of Baby

This one says that you carry lower with a boy and higher with a girl. Both of my babies have been very low. E was engaged early even though he didn’t show up until 42 weeks, 2 days.

Supposedly the heart rate will be faster for girls than boys. E’s heart rate was always right around 150. Baby #2 has been between 130 and 150 so far.

Of course, if you’re craving sweet you might be having a girl, but if all you want is sour it’s a boy.

Early in my pregnancy, I was craving pumpkin, baked potatoes, almond chicken, and popcorn.

Lately, it’s been the stereotypical pickles.

Since I gave up sweets in January, and I cannot even have much fruit due to my blood sugar issues, my cravings for sweet are pretty much non-existent by now.

This is the method for baby gender prediction that my first midwife says is often very accurate. It uses the mother’s age and month of conception to calculate whether you will have a boy or girl. It was right for Baby #1. This time around it says we’re having a boy. We’ll see if it can go 2 for 2.

Similar to the Chinese calendar, the Mayan version uses the mother’s age and year of conception to predict gender. If both are even or odd then it’s a girl. If on is even and the other is odd, then it’s a boy. That would mean we’re having a boy.

In theory, moms of girls experience more breakouts during pregnancy. I haven’t had much of any this pregnancy except very early on.

If you’re super sick during the first trimester that indicates a girl. Just a little queasy? It might be a boy. I wasn’t sick for very long this time. However, I never threw up with my first, and I did this time, a couple of times. Still, I know it wasn’t bad compared to what a lot of people have.

If you find yourself sleeping on your left side you might be having a boy. Sleeping on your right indicates a girl. I lay down every night on my right side even though I know the left side is better for positioning the baby. It just seems more comfortable.

Little girls are all softness and sweetness from the start. If you have soft hands during pregnancy, it means a girl, and dry hands suggest a boy. Since we hand wash all our dishes, they’ve been a bit dry.

Although I’ve heard that pregnancy makes everyone a little clumsy, this one says that a graceful mama will have a girl, and a clumsy one will have a boy. I have definitely taken my share of dramatic trips and falls in both pregnancies.

If you’re moody during pregnancy it means a girl. Aside from a couple of major meltdowns in the first trimester of my first pregnancy, I was pretty stable.

This time, I’m sure everyone around me can attest that I’ve been moodier. I’ve also noticed I cry more easily as the sappy little things.

One of my midwives mentioned that I could be having such an all around different pregnancy because I’m reacting to the hormones of a different gender baby. Maybe there’s something to it.

Although I’ve heard it both ways, the most common seems to be that if you’re carrying all out in front it means a boy, and more all around is a girl.

This time, my belly is pretty prominent in front. With Baby #1, I carried all around and just got wider as the weeks went by.

If a toddler boy is interested in your belly then it’s a girl. BabyE has definitely been interested in mama’s belly, talking to the baby and giving it hugs and kisses. So sweet!

According to one of my midwives, if you dream of having a boy it will come true.

However, with my first pregnancy I had such a clear dream that I was having a girl, and it turned out to be a boy. I haven’t had any dreams about Baby #2, let alone gender, yet.

If your linea negra goes only to the belly button, you might be having a girl. If it goes all the way up to your ribs, then it’s a boy.

This was true for me with my first. I had a super dark linea negra that went all the way up. This time, it is faint and stops far short.

I’m 38 weeks now, so soon we’ll know for sure! Update: You can read Baby #2’s super-fast arrival story to find out if these predictions were accurate.

Do you think we’re having a boy or girl? What wives-tales proved true for you? 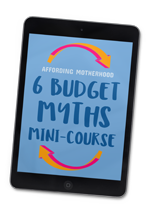 Do you struggle to stick to a budget?

Join the 15,313+ Affording Motherhood moms and get your free budgeting course: 6 Budget Myths that Keep You Stuck (and what to do instead).
Send Me Lesson #1

Do you struggle to stick to a budget?

Join the 15,313+ Affording Motherhood moms and get your free budgeting course: ‘6 Budget Myths that Keep You Stuck.’
Send Me Lesson #1 I believe you can be a stay at home mom without constantly stressing about money. Let me help you thrive financially – so you can spend more time with your family.
Start Here >>