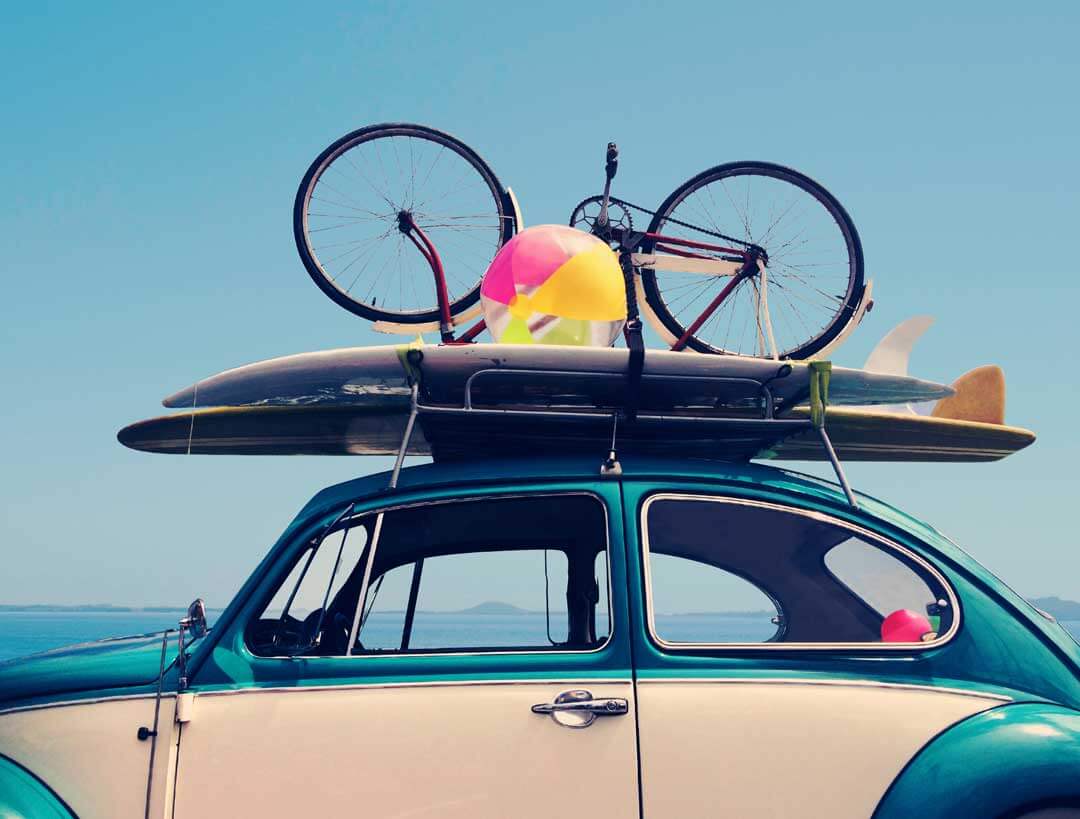 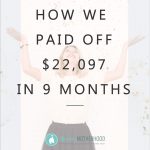 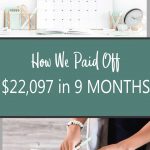 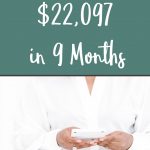 Don’t miss the details of how our family paid off over $20,000 in student loans in less than one year. Inside, you’ll learn how to become debt free, too.

Back when I first read about the concept of being “debt free” I immediately dismissed it. ‘Ya right, there’s absolutely no way we’ll be able to do that on one low-income with one little kid and another one on the way. That’s great for them, but they don’t know how much debt we have and how small our income is!‘

At that point, I had pretty much accepted the fact that my husband and I would finally pay off our student loans about the time our kids hit college.

There wasn’t even a tiny inkling of hope that our family would be debt free within ten years, let alone one! (In reality, we had about 6 years left on our loans, but I wasn’t even financially savvy enough to know that at the time.)

But that phrase “debt free” wouldn’t leave me alone

It seemed it was everywhere I looked around the internet and popped up in conversations with people we talked to at church and in my mommy groups.

Still skeptical, I picked up one of Dave Ramsey’s books at the library to find out what the buzz was all about. Inside I found stories of families like mine making extreme changes to their lifestyles and even getting second jobs or earning extra money from home, all for the goal of becoming debt free.

It seemed to my husband and I that this was all more than mere coincidence and we felt the call to get out of debt ourselves. We had over $22,000 left in student loans, and it was time to do something about it.

In September 2013, we tentatively started our journey.

The first, and possibly most important, step I took was to finally learn how to budget the right way.

However, there seemed to be absolutely no wiggle room in our budget, so even that small amount felt like a huge step. The cool thing is, even paying a tiny bit extra towards loans can really accelerate your journey to debt free in more ways than one.

After taking that first tiny step, God multiplied our efforts. Just 3 months later, we paid off the smallest of our student loans. Suddenly we were on track to have all of them paid off within just 25 months.

For the woman who thought she’d be paying off these loans for more than a decade, this in itself was amazing!

After paying off that first loan we were inspired to get even more extreme with our money saving measures to pay off our debt faster.

9 Crazy Things We Did to Be Debt Free

1. We cut our grocery budget in half

And then we cut it even more. For a few months at least, I had to let go of my fixation on only feeding my family organic foods for the sake of a bigger goal. But I developed a method to manage my grocery budget while still putting healthy, natural foods on the table.

2. We developed a habit of making do with what we had

When our french press broke, we brought our camping percolator in from the garage to make coffee on the stovetop instead of replacing it.

3. I did whatever I could to make money from home

Even though I had a newborn and toddler at the time, I gave up sleep to work at nap time and after the kids were in bed to grow my blog, market my book, and do some work in my ‘real’ career field as an architect. We’re blessed to live in a time where there are lots of opportunities for moms to earn extra money from home.

We also used every little bit of extra money that came our way to throw at our debt as soon as it came in.

4. We broke the habit of rushing to the store anytime we thought we “needed” something

When our bath mat unraveled in the laundry, instead of running to Target for a replacement, we just used an old towel instead.

5. When there was something we wanted, we saved up and shopped for great deals

When the immersion blender broke, we didn’t replace it. (After 5 years of marriage, apparently, everything you got at your wedding starts breaking.) Finally, we saved up our “home supplies” budget category and bought a $10 blender on a Black Friday sale.

In January 2014 we took the No Spend Month Challenge. I only spent $170 on groceries that whole month! (And no I didn’t overspend the next month to compensate.) All the money we saved went to making extra payments on our loans.

7. We lived in a 730 square foot single-wide with very affordable rent

We had no idea at the time we moved in how living in a small house would play into God’s plan for us in so many ways. At the time, it was simply all we could afford.

When the baby decided she needed her own room at about 7 months old, we moved our bed into the living room. That made it just a little awkward to have company!

Oh and did I mention, there was no dishwasher?

8. We were a one-car family

Every time I needed to go shopping or take the kids to a doctors appointment, I had to load them up in the car, drop my husband off at the park-and-ride at 6:45 in the morning. Then I’d go back home, go to my appointment, get dinner ready, load the kids back up (rain or snow or nap time) and pick my husband up after work.

With nothing in walking distance except wheat fields and a fire station, we didn’t get out much during this time. It was tough, but it was worth it!

9. We stuck close to home

We didn’t travel more than 40 miles from home for 22+ months while we worked on paying off our debt and then building our emergency fund.

Of course, this is just a sampling of all the things we did to get out of debt.

…on a household income that (at the time we started) fit under the government’s low-income category for a family of four.

And we did it all in 9 months.

Since God is a brilliant storyteller, he just couldn’t let the chance pass to make His point with a flourish. We were able to make that last payment and be debt free exactly one year to the date that we lost our old home in a short sale. We could do nothing but stand in wonder at how far He had brought us both spiritually and financially in just one year.

Faster than I can even believe, we cut 5 years off our debt repayment, and along the way, we have achieved a huge new sense of joy and freedom.

What does this mean for you?

If you’re reading this and thinking to yourself, ‘this is great, but it would never be possible for me,’ remember, that’s exactly what I thought when I first heard the concept of being debt free.

But here’s the hard truth.

As long as the story you tell yourself is ‘I can’t do this because I don’t make enough money,’ or ‘it’s impossible because the cost of living here is too high’ (I’m talking to you Southern California) you won’t be able to.

For most though, that’s not the case. Our take-home pay when we started was only $3,000 per month. We did everything we could along the way to increase our income, of course. But even with the small changes we made at the beginning, we were on track to pay off our loans in just over 2 years. Once we saw the success we were having, we wanted to do everything we could to get it done faster.

There are thousands of families in the Affording Motherhood Community taking control of their finances. And just like us, they are determined to get out of debt no matter what it takes.

If you’re staring down what seems like a mountain of debt and a budget that already doesn’t add up, I’ve been there.

And I can tell you that by far, the biggest mistake you can make is simply not believing it’s possible to get out of debt.

You’ve already taken the important first step of opening up your mind to the possibility of living debt free.

Next, it’s time to face your fears. Yep, take a look at your debt. Find out exactly how much you owe and how long it will take you to pay it off if you keep paying the minimum.

Then, decide on some small changes you can make to pay it off faster.

As you can see from our story, paying off debt is really a series of smaller steps that all add up to something amazing. I’d love to help you get started.

You can take this 3-minute diagnostic quiz to see exactly how to best tackle your debt. It will give you an action plan based on your personal values, lifestyle, and financial situation.

And if you’re completely determined to pay off your debt once and for all, I’ll lead you through how to begin to dump the debt in my 30-day workshop.

Whatever you do, start now.

Don’t allow your debt to continue to grow and control your family for one more day. You can do this! 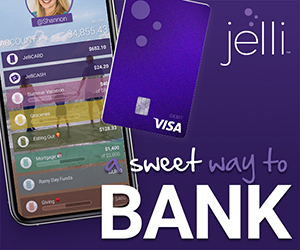