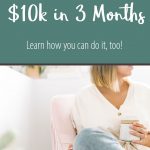 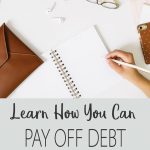 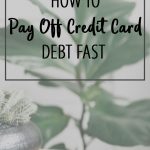 After years of struggling, this mom finally learned how to pay off credit card debt fast, and today she’s sharing how she did it.

With her sweet demeanor and cute blond bob, it seems at first glance that Skylar has it all together. In fact, she is doing amazing: homeschooling her eight adorable children, prioritizing her marriage, and pursuing personal goals.

However, money management had eluded her and her husband throughout their marriage. Like most of us, they simply never learned sound financial principles.

Over the past three months, Skylar made some simple changes to the way she budgets, and finally – after years of struggling to pay off credit card debt – she finally succeeded.

You read that right. In less than three months, she and her husband completely wiped clean the heavy burden of credit card debt that was weighing them down.

So how did she do it?

How to Pay Off Credit Card Debt Fast

“My husband lost his job due to layoffs in 2010, we lost our home, and he went on an independent business venture that went south, we now had quite a bit of debt that we had no idea what we had been buying, so in 2014 we paid for and attended a Dave Ramsey Financial Freedom course. This was helpful in getting my husband and I on the same page but not in getting us working on a system to make budgeting a lifestyle, no matter what we did we always had 10K in CC debt to pay off.”

“It was like the last 10 pounds of a diet,” she told me, and they just couldn’t shed it.

Although she was already a second-hand shopping diva, clothing her eight children for less than $55 a month, something else always seemed to come up despite their best efforts. There never seemed to be a clear focus on where they were headed, and communication about what should be spent was a struggle.

In addition, a difficult pregnancy, health issues, and the blur of life with babies made it harder than ever. Time passed as it does in busy family life, yet the burden of debt hung still over them.

Skylar felt as if they were in a perpetual state of paying off debt, but they never quite crossed the finish line.

A New Approach to Paying Off Credit Card Debt

Skylar had taken the grocery savings course I teach a couple of years before, so when she saw the information about my new budgeting program – the Affording Motherhood Budget Breakthrough – she knew she wanted to join.

However, she later told me, “adding one more thing to my already full schedule and brain made me hesitate to join the Budget Breakthrough program. I remember when I signed up for the program, 3 months seemed like such a long time away, I worried that I wouldn’t be able to commit, that I would start strong but burn out within a few weeks and just shrug it off.”

In the end, she did keep pace and complete all of the lessons each week. “I enjoyed the short and to the point lessons,” she wrote, and how she’s reaping the benefits of her hard work.

What was different about the Budget Breakthrough Program?

1. She has a crystal clear plan of where to go and how to get there.

During the first month of the program, Skylar took an honest look at her family’s current financial situation.

“It seemed like everyone had their hand out. As soon as money would come in, it would go right back out…Finding all those ‘little’ expenses that were adding up to huge dents in our income was helpful, they were kind of like nails in a tire, slowly letting air out but not quite flattening it.”

What I love about Skylar, is that she didn’t let the daunting reality stop her.

“I want a path to freedom, a plan on what we are supposed to be doing and how to get there,” she told me, and that’s exactly what she created in Modules 1 and 2. She sat down with her husband (and a glass of wine) and made a detailed plan about how to move forward.

With their plan in place, they threw any extra income her husband earned toward their goal of paying off their credit card debt.

She implemented a system to track expenses in a way that works in her busy schedule and which allows her to communicate easily about spending with her husband (Module 5). So now she knows exactly where their money goes every month.

2. She has a proven system tailored specifically for busy moms.

Yes, Skylar already knew the basics of how to budget and save money, but she was never able to follow through on her goal of paying off debt. What she needed was a simple system that was easy to maintain in the midst of busy family life.

“Thank you for sharing your gifts and talents with those of us who haven’t been gifted in that way but desperately want out of the credit card debt cycle. I’ve done other financial programs that just run you through the same steps. You took the time to create systems that a family can plug into their lives and work with, one small victory at a time. I enjoyed receiving this information from a mother who knows the struggle.”

She says she keeps her budget checklist (Module 8) handy to keep her on track throughout the month, which includes checkpoints and prompts to make it easier to discuss money issues with her husband. “I now have a system to get all the aspects of budgeting down.”

3. She has an experienced mentor by her side.

The last thing Skylar needed was more shame about money. Instead, she needed someone who was on her side that could provide ongoing support and gentle accountability.

“Shannon has a style of teaching that speaks to me with dignity, I wasn’t some dummy for getting myself in debt and now needed a reprimand to get me out. Not only does she have the wisdom to get you out of the hole but she has the compassion to express through her lessons, ‘I’m right there with you’. I think that is what made the biggest difference for me, she makes this process a personal one. I felt like she was there cheering me on and it made me want to at least try what she was suggesting, and you know what, her suggestions are so simple and yet so effective!”

“I really enjoyed the coaching, it helped to have someone outside of myself look in and see what is going on and give me feedback, areas that things are looking good and areas that could use some attention.”

As a member of the Budget Breakthrough program, Skylar gets support in the form of coaching, community forums, and budget reminders to keep her on track for the long term.

In month 3, Skylar joined in the No Spend Month Challenge. In the first two weeks of the challenge, she was able to shave off an extra $200 from her grocery budget.

I talked to Skylar less than three months after she began the Budget Breakthrough Program, and she was giddy as she told me of how she and her husband had just paid off all of their remaining credit card debt.

They defeated that last $10,000 that had been weighing on their hearts for so long.

“In the 3 months that we have been following the Budget Breakthrough program we:

So what’s next for Skylar?

Skylar plans to take everything they were using to pay off the credit cards and use it to pay off their family’s two vehicles. She can’t wait to exchange the phrase “we’re paying off debt” for “we are debt free!”

From here on out, she hopes to take their blessings and use them wisely by saving for the future.

As they continue to work toward their financial goals, they’re also saving up for a family vacation.

Skylar and her husband plan to update their financial goals together each quarter, and I can only imagine what amazing things the future holds for their family.

What does this mean for you?

Have you tried everything to learn to budget, but still can’t stick to it?

Do you have the weight of debt hanging around that you just can’t seem to shed?

Like Skylar, you can learn to budget successfully, so you can pay credit card off debt — even in the midst of your busy family life.

Reach out for a complimentary consultation.